JON DIVA & THE ROCKETS OF LOVE

With a larger than life back story more concerned with forging a dynasty than it is with recanting historical fact, you could be forgiven for thinking that Jon Diva and his band The Rockets Of Love were trying to muscle in on the eighties parody market. Yet, whilst they undoubtedly share the same love of that golden decade as a certain potty mouthed pantomime act, their take is far less defamatory. Fireworks caught up with larger than life front man Jon Diva to talk about new album ‘American Amadeus’… well, we tried! 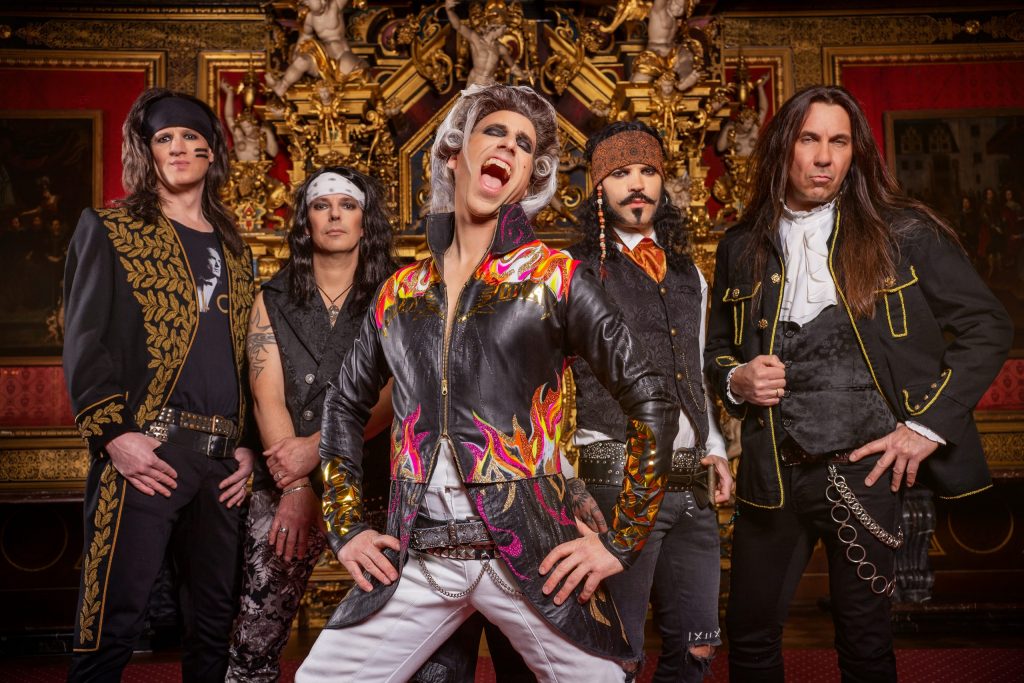 Okay, quick recap. Legend would have it that Jon Diva And The Rockets Of Love started life in San Diego… I’d recommend their biog on the official JDATROL website, which is as fine a reimagined walk on the wild side as you’ll find anywhere! As far as we mere mortals are concerned however, they’ve been doing the rounds here in Europe for a good few years now, appearances at prestigious events like Wacken Open Air, steadily building their profile which finally exploded in spectacular style on their debut ‘Mama Said Rock Is Dead’ back in February 2019. Devoutly reinterpreting the Whitesnake, Aerosmith and Van Halen (or anything with toupee’d hair apparently!) playbooks, it was an adrenaline fuelled blast from the past that put ‘fun’ and ‘entertainment’ front and centre. Now, sophomore album ‘American Amadeus’ presents an altogether more mature sound.

Although comparisons are inevitable, the band doesn’t seem phased at what the downside any Steel Panther associations might bring.

“I’m only afraid of delivery problems importing champagne from France’, laughs Jon. “I think most people who are familiar with the genre can tell the differences between cats and Divas! The feedback we’ve had is overwhelming. We simply love what we do, and so do a lot of others it would seem. Even as a kid I didn’t care what people thought of me and my music and whether it could be successful or not. So fuck the mainstream, let’s have a good time!”

Even with debut ‘Mama Said Rock Is Dead’ generating such positive press, it was surprising how quickly the band started to gather real momentum.

“Honestly, I was a bit surprised by it”, admits Jon, “in a positive way of course. It showed that the mainstream is oriented towards a very specific audience. It fails to realise that there are millions of people who don’t care about the charts at all, but who have a great and long passion for a certain kind of music. That’s the great thing about Rock music. There are still structures that make it possible to be perceived worldwide. It’s about passion, about belonging. I read reviews that made me happy because they really seemed to understand exactly what we are about. For all the fun and lightness, we also take what we do insanely seriously.”

“Indeed,” Jon agrees. “We are a band that cares a lot about the visual aspect. We love the stage, the outfits, the grandeur; it should always strive to be bigger. We’re dreamers; that’s what most musicians have in common. With a video you can resurrect times and feelings, you can invite people into your world and show them how it looks… that’s great and we enjoy it so much. The only disappointment was that the herd of zebras in the current video got stuck in customs!”

Listening to ‘American Amadeus’ it seems a conscious decision was taken to step back a decade or so.

“We write very intuitively,” Jon explains. “We have three composers with JJ (Love), Snake (Rocket) and me, who all have their own influences, and I write most all the lyrics. However, every now and then JJ has a great lyrical idea (‘Wasted (In Babylon)’ for example) which I then have the honour of expanding out. It all has to make sense in the end though and we do fight at times over individual songs, but that acts as a great filter because it filters out everything mediocre… as if there was that with the Rockets of Love! From the outset though we didn’t want to make another album that sounded like the debut; we wanted to upgrade and make it harder, faster. When the title track came along it was immediately clear to us how the new one should look… a new level of glamour, energy, and crazy madness. This time it’s even more irresistible than on the debut. It will make you rock hard!”

Like the debut, this latest release was put together under the watchful gaze of producer Michael Voss.

“It was an easier record to make I think,” Jon reflects, “partly because we’d already worked with Michael before. He has his way of doing things, which we get along well with. As a singer I feel amazingly comfortable with him. Lee (Stingray Jnr.) is a beast in the studio; he put down the drums for the whole album in less than sixteen hours… much like Remmie (Martin) with the bass. We took more time with the guitars though, that’s for sure. Both Snake and JJ do a great job; they’re an incredibly versatile duo. ‘Mama Said…’ was a blueprint that excited a lot of fans because it reminded them of the genre greats between ’84 and ’87. In a way it was a tribute because it was such a great time. ‘American Amadeus’ shows that we want to and can do more. It’s a very self-confident album and I think the title track stands for everything we are. What we do as a band has to be larger than life. The maelstrom is full of references; it’s a postmodern journey through many styles and times. That was quite intentional. Be prepared to expect the unexpected.”

Although the global pandemic has put plans to take the album on the road on hold for now, memories from the last tour still loom large.

“Def Leppard was definitely a highlight of summer 2019,” Jon confirms. “It was in the middle of Berlin on a glorious summer day just like you want it. Europe was also on the ticket; we had great fun backstage. Joe Elliot had seen all our videos and found them hilarious! We have great memories of the tour with Kissin’ Dynamite too, we developed a great friendship and camaraderie with them I think.”

A definite connection seems to have been made with a newer audience.

“Judging by the amount of female underwear that flew onto the stage,” Jon reflects, “apparently we went down pretty well! Some people had their fun and found everything over the top, others really got into us pretty quickly. Some will probably have gone drinking and not bothered to watch us, but that’s also okay. Whoever is thirsty must drink!”

Both COVID and BREXIT seem to have hit the European music industry hard.

“It really is extremely hard,” Jon muses, “everyone misses their life. My life mostly takes place on tour, I love it. Especially with a new record you want to get out on stage, play the new songs and celebrate and try them out together with the fans, it’s like a brand-new toy. But we’re trying to look forward; we’re producing online shows, videos and all kinds of great formats to stay in touch with our people. Be sure, we will continue to keep you well entertained until we can play live again!”