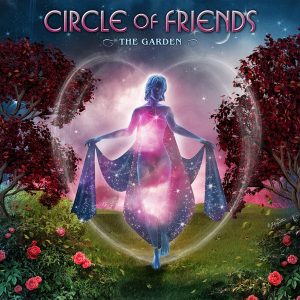 Conceived by Fireworks proprietor Bruce Mee, ‘The Garden’, which hopefully will just be the first release under the Circle Of Friends marque, started life as a personal tribute to his late mother Margaret, but has subsequently developed into something rather more.

Put together under the aegis of Escape Music’s head honcho Khalil Turk, the album offers up a frothy mix of unashamedly eighties-sounding Melodic Rock, a plethora of guest vocalists each adding their own slant to the songs. A smattering of guest guitarists – Joel Hoekstra, Tommy Denander and Steve Mann, amongst others – help provide the necessary foreground colour and structure to each track, whilst Wayne Banks (bass) and Josh Devine (drums) prove themselves to be a more-than-capable rhythm section.

Offering a mixture of covers and originals – the latter mostly written by Swedish song-writer Mikael Rosengren – it’s left to the inimitable Doro Pesch to set the ball rolling as only she can with robust opener ‘Little Piece Of Heaven’. It’s a moody, mid-paced pot-boiler of a song; its classic Bonfire-like sound, accentuated by that delicious Doro roar, hits an emotional high that is then maintained throughout.

Looking at the cover songs; as a big ABBA fan (like Bruce himself), I was immediately drawn to the muscular version of ‘Knowing Me, Knowing You’, with its sultry Robin Beck vocal. ‘Never Gonna Make Me Cry’ – a track from the debut Fierce Heart album – sees Beck’s spouse James Christian get in on the act, whilst the offbeat Blondie cover ’11:59’ (featuring Ellinor Asp from Hellinor) throws in a bit of a “New Wave meets Pop Rock” curveball. Pick of the bunch however, is the absolutely brilliant version of ‘Don’t Fear The Reaper’ which closes out the album, Robin McAuley making it all his own.

Not to be in any way overshadowed, the remaining originals also have plenty to say for themselves. The anthemic ‘Bad Blood’ is an obvious place to start; the shimmering, resonating roar of Jeff Scott Soto simply setting it alight. Then there’s the rousing ‘Trick Of The Light’ with erstwhile Headpins chanteuse Darby Mills. Finally, there’s the bright n’ breezy ‘Truth Or Dare’ with TAO’s Karen Fell, and the forthright self-penned ‘Take My Love To Heart’, featuring the dulcet tones of Jaime Kyle, which includes a great solo from Hoekstra.