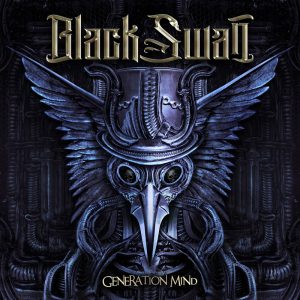 Something that Frontiers often gets criticised for is their “project” albums, where they gather a group of different musicians to make a record. The Italian label defend the practice by saying they are simply releasing new music, and sometimes they strike absolute gold. While some projects have been duds, I think most people would say the first couple of Sunstorm records with Joe Lynn Turner were well worth exploring. Revolution Saints also went down rather well, and quite a few people seemed to enjoy the Sweet & Lynch collaboration. However, Black Swan might be their greatest success.

Pitched as a “super-group” consisting of vocalist Robin McAuley (MSG), guitarist Reb Beach (Whitesnake), bassist Jeff Pilson (Foreigner) and drummer Matt Starr (Mr. Big) there was no weak link in personnel, and their debut album ‘Shake The World’ proved just that. Packed from start to finish with high quality Hard Rock, it was received with open arms, and talk of a follow-up soon started. ‘Generation Mind’ is that follow-up, and is just as good, if not better than its predecessor.

Vocally, McAuley is magnificent and absolutely owns the high octane ‘She Hides Behind’, while the title track shows how the band can mesh a hooky chorus with a solid riff. The bouncy bassline of ‘Eagles Fly’ is great, but ‘See You Cry’ is better still; a perfect example of what used to be known as radio-friendly Rock, plus it contains a glorious chorus.

Reb Beach shows exactly why he’s so highly thought of throughout this record, but honestly there’s no weak moment here – just great Rock songs like ‘Long Way Down’ that are performed and sung by top drawer talent. Crucially, and this is the reason why I think Black Swan sound so good, they have been allowed to write their own material. Frontiers can sometimes be guilty of flooding their records with in-house compositions which are often formulaic. Black Swan buck that trend, and as a result sound like an actual band rather than a sterile studio project.

The first record was great and this second is equally magnificent… if not more so. I really hope this quartet continue on, because the quality of their output makes them one of the jewels in Frontier’s crown (to my ears). Excellent!